In this post, we show how to implement a custom loss function for multitask learning in Keras and perform a couple of simple experiments with itself. TL;DR; this is the code:

In a previous post, I filled in some details of recent work on on multitask learning. Here I will describe a few experiments to investigate the applicability of the new loss function described therein and show an implementation in Keras, a Python library for neural networks. Let’s start with a set of tasks that ideally fulfill the assumptions under which the loss function was derived and show the increase in performance over regular MSE. A different example that doesn’t fit so well the assumptions will follow. Only the ML-related code is shown here, but the rest is available

Learning the \(\sin\) function with noise

Let’s keep it simple by choosing to learn the \(\sin\) function in the \([0, 2\pi]\) interval with different amounts of gaussian noise added. The first task is generating some data to feed into this experiment. Let’s sample the independent variable to randomly in the \([0,1]\) interval, then pick 5 numbers to use as standard deviations and then draw from normal distributions with 0 means and these standard deviations to obtain 5 progressively more noisy versions of the original task. Finally, let’s add two columns with the values of the independent variable and the original, noiseless dependent variable values, for ease of plotting (np is short for numpy and pd for pandas):

While discussing multitask learning is not the goal here, this is a favorable setting for it, with 5 closely related tasks in that the noiseless function to be learned is the same for all the tasks. But the 5 tasks are also different since they are progressively more noisy, a problem the multitask loss here presented is designed to tackle. Let’s split the data in train, test and stop data set. I need a stop dataset because I plan to use early stopping to protect against overfitting, but in many papers the test set is used for such purpose. I believe a true test set and a learning algorithm need to have an “air gap” for the test set to fulfil its task, as many Kaggle competitions have amply demonstrated.

The reader may have noticed that stop and test sets are much bigger then the training set. I wanted to keep the task difficult but have reliable ways to avoid overfitting and to evaluate the effect of the change in loss function, which is the only goal of this exercise. In practice, such a split is not commonly used.

First let’s take a peek at the training set: 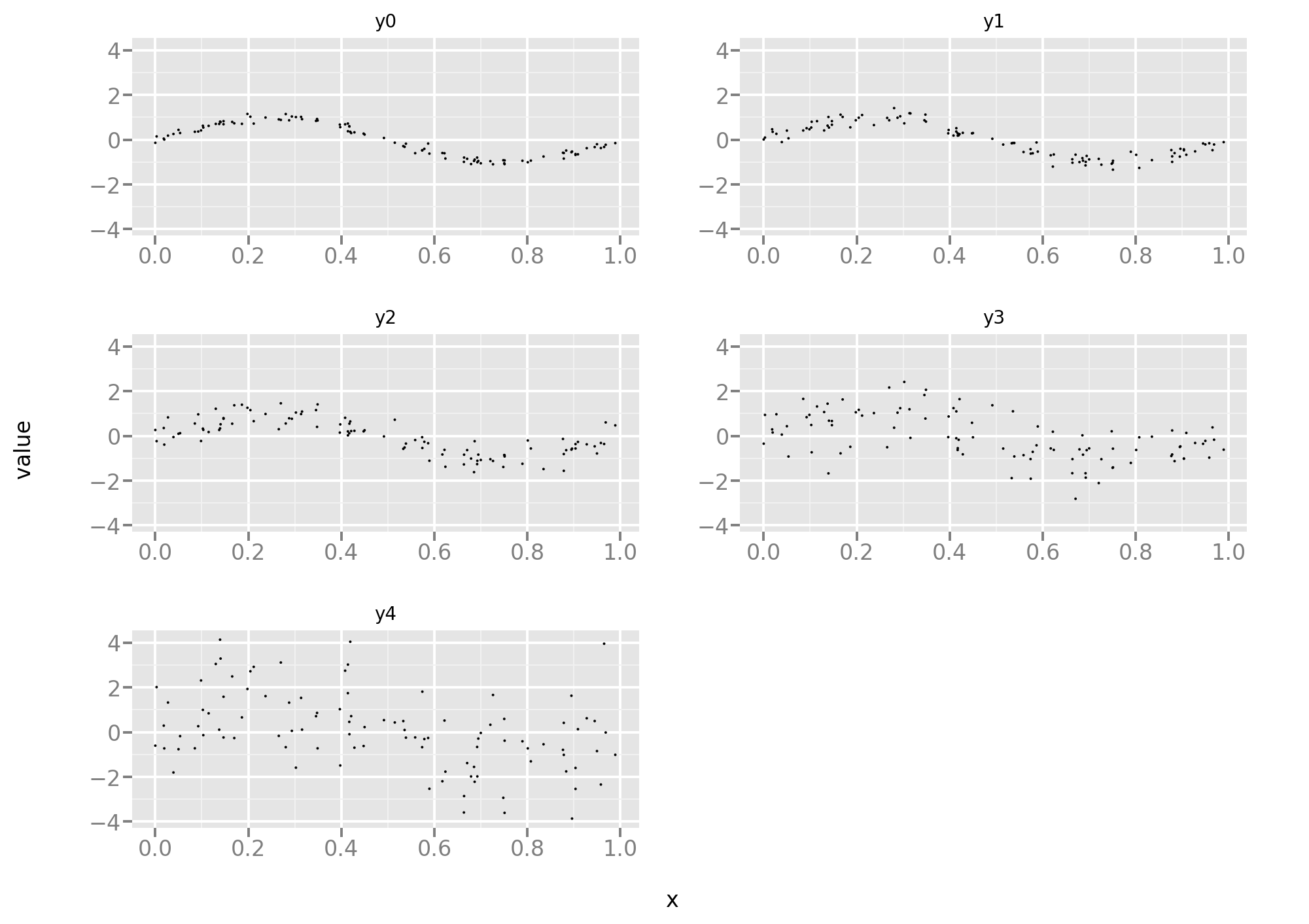 As one can see, progressively more noisy versions of the same task.

Let’s now define a neural net model. I picked a multi-layer perceptron with 10 layers so as to allow enough steps for the tasks to be solved in an integrated fashion. One big novelty about deep learning is the possibility to share internal representations between tasks, whereas with shallow models, neural or not, this is not possible. I did not tinker much with sizing, since I didn’t want to bias the results of the experiments. One thing I did tinker with a little, reluctantly, were the patience parameter in the early stopping rule and the epsilon parameter in the Adam optimizer. This was to counter a pernicious tendency of the optimization to reverse course, that is increase the loss, sometimes drastically so, towards the end of the fitting process. Apparently the Adam optimizer is prone, when gradients are very small, to running into numerical stability issues, and increasing the epsilon parameter helps with that, while slowing the learning process. Increasing the patience parameter has the effect of continuing the optimization even when plateaus of very low gradient are reached. Decreasing it results in the fitting process to stop before it has reached a local minumum, because of the randomness intrinsic to Stochastic Gradient Descent, on which Adam is based. It is unfortunate that many if not all of these optimizers have so many knobs that may need to be accessed to achieve good performance. Not only are they laborious to operate, but they can also get us lost in Andrew Gelman’s so-called Garden of Forking Paths, whereby overfitting can occur more or less unintentionally. The importance of this is starting to be recognized by the most alert members of the ML community, but is a well established theme in statistics (multiple testing correction, false discovery rate etc.)

In addition to the fitted model, a record of the training process is also being stored, which enables a standard visualization of how training set and stop set losses (named loss and val_loss resp. in the graph) decrease over the epochs of training. Also please note how this function is parametrized on the loss function, which will enable the central comparison in this post. 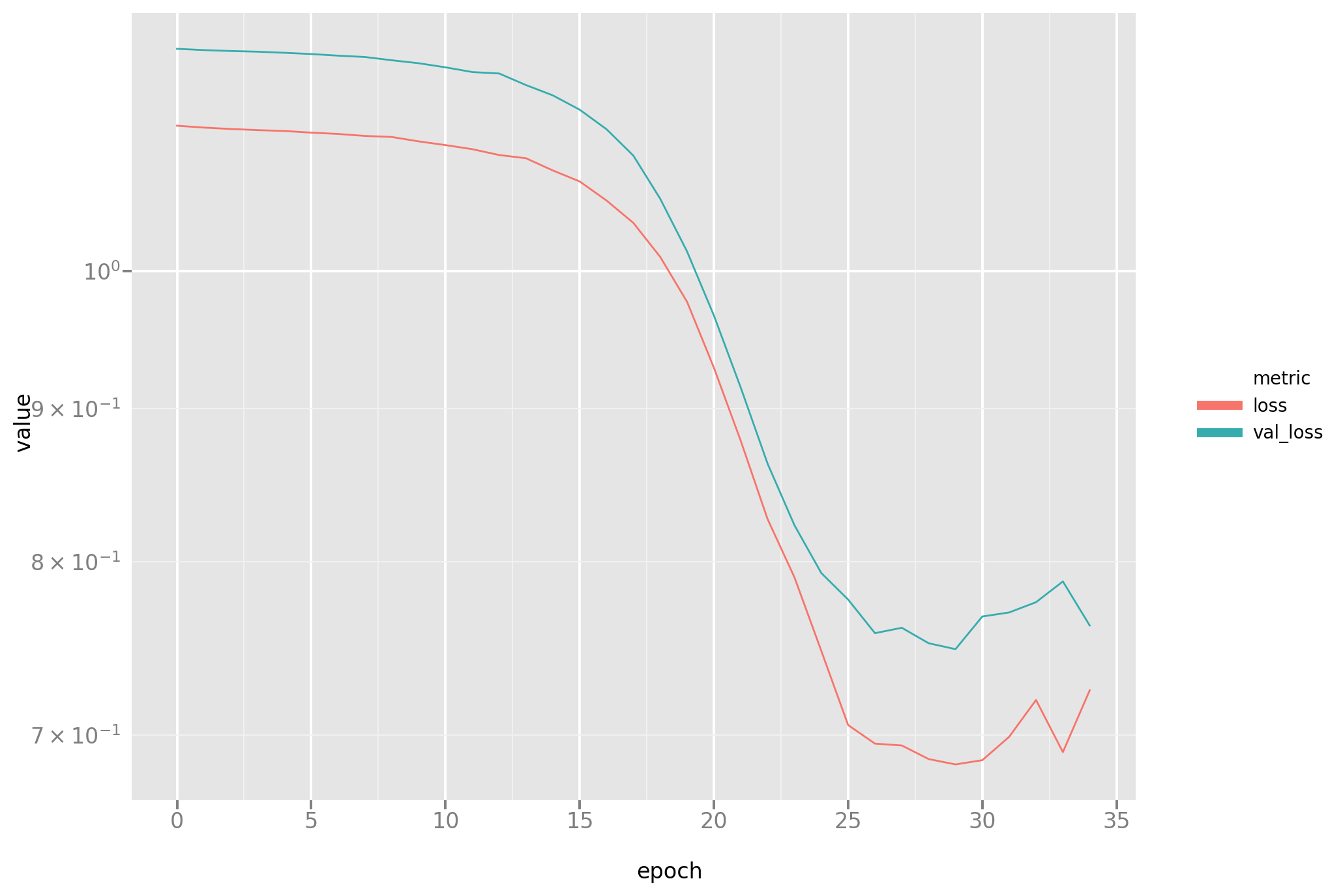 And here is a look at the actual predictions. A more rigorous comparison between this and the novel approach will follow. 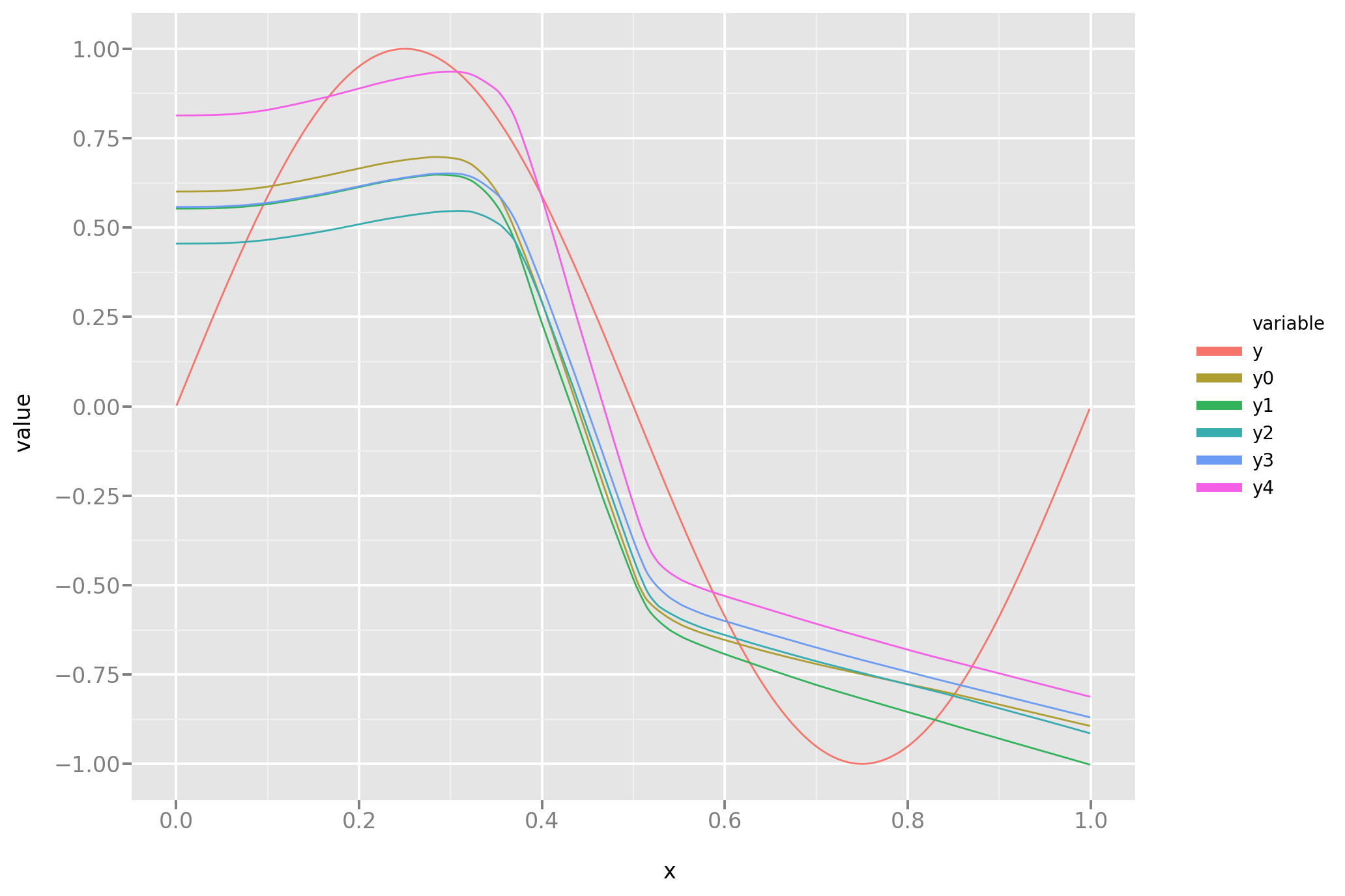 Now let’s repeat this is experiment substituting the standard MSE loss with the one derived in the previous post on this subject. As the reader can see, the implementation in Keras is simple but one has to substitute standard vector operations with Keras low level ones, and make sure to use the correct axis when operating on tensors.

The same loss plot as before for completeness: 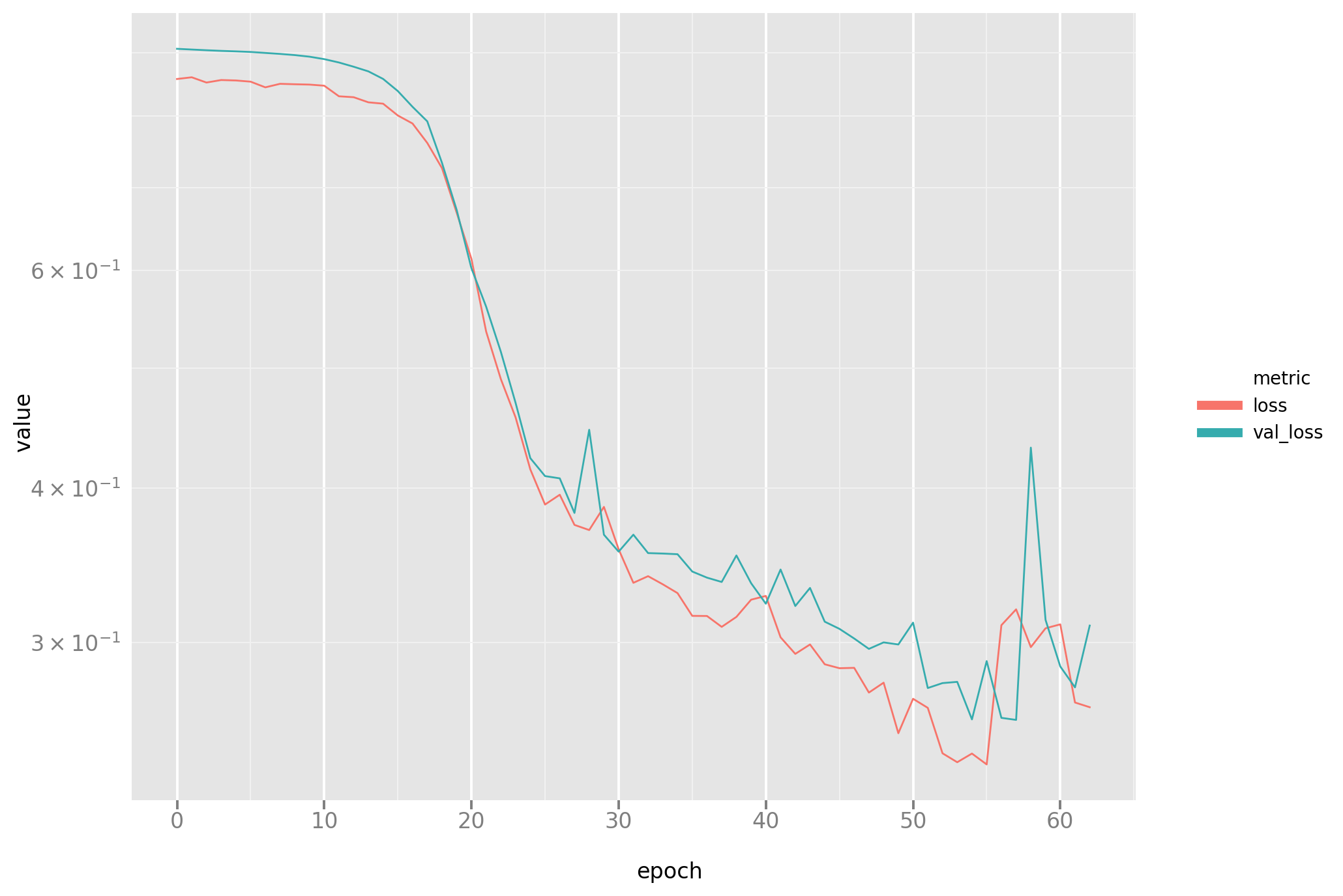 And the line plot: 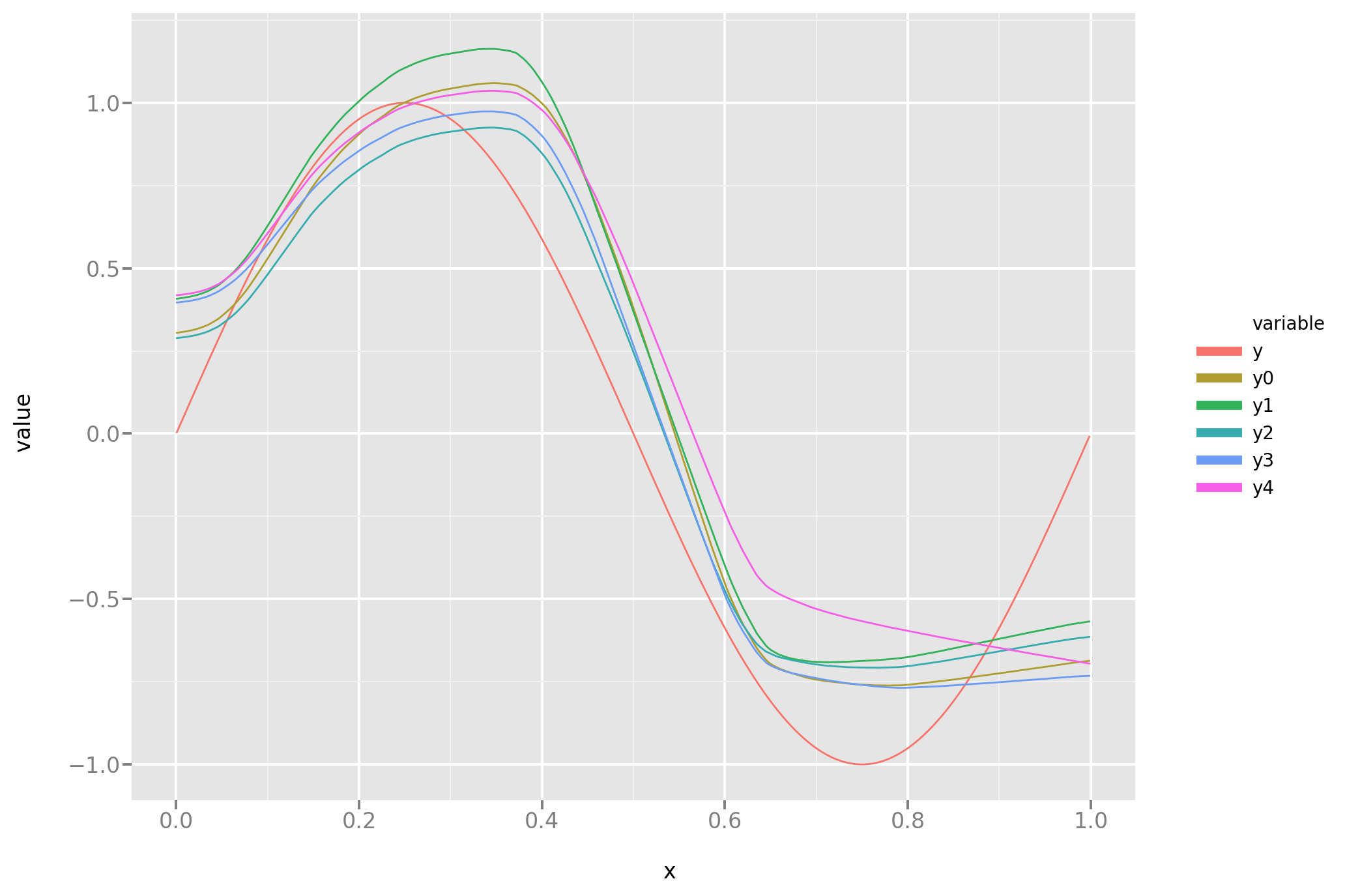 Is it better? Let’s look into it:

And, comparing task by task, it looks like it mostly is:

The most alert readers for sure are aware of the reproducibility crisis in the sciences, whereby many published results do not stand the test of time. This is a complex subject, but one important factor is that sometimes surprising and interesting and therefore very publishable results occur by chance. Sometimes luck is enhanced, deliberately or not, by the researcher, operating on various analysis “knobs” or discarding “bad data” (also known with the suave term of “data cleaning”) or modifying the metric of interest or the research question until something “interesting” but random shows up. The reviewing and publication process creates the wrong incentives by insisting more on novelty than methodological rigor. In AI research this problem is compounded by frantic competition, automation of hyperparameter search and by the dominance of a few very prominent benchmark datasets that have been studied in depth, thereby leaving no data to be used as a true test set anymore. In this post, working on a small synthetic dataset, there is the opportunity to repeat the experiment many times and estimate the results’ variability: 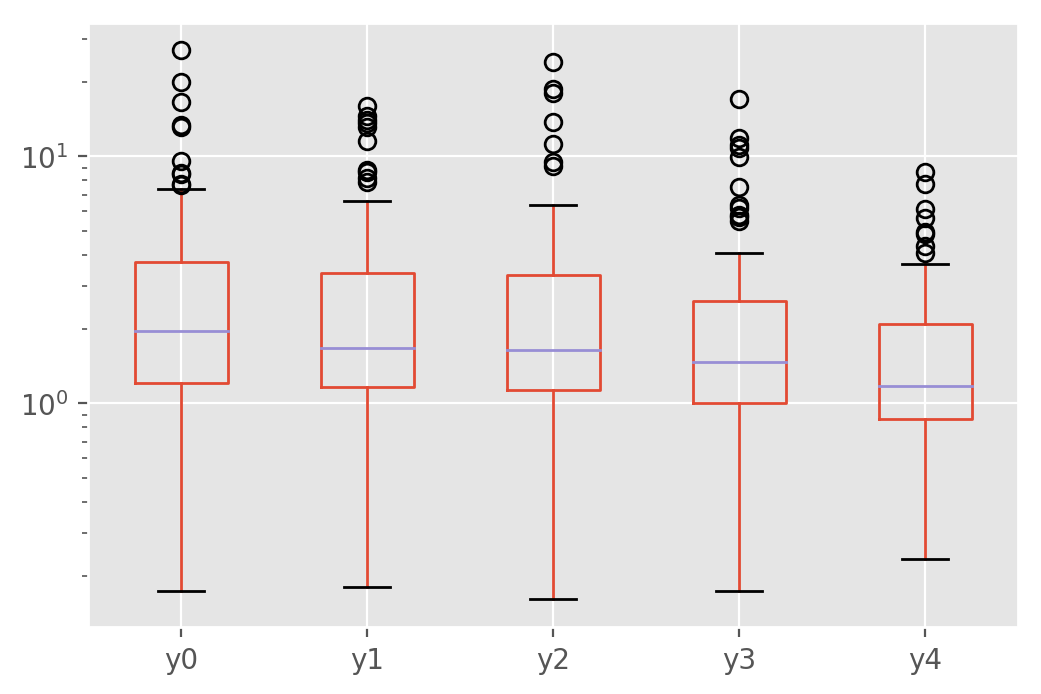 This provides a better understanding of how the new loss function helps in a majority of cases, but can also hurt sometimes. In a practical application, this level of variability would likely not be welcome and would need to be mitigated by training on more data, averaging models over serveral runs or other means.

Let’s now apply the same techniques to a problem where, like in many AI problems, the challenge is not randomness in the data but just the complexity of the tasks. Specifically, let’s fit a neural model to 5 shifted versions of the the \(\sin\) function, with no added noise.

The data split is exactly as before:

Let’s take a look at the training data. Here the 5 tasks are equally difficult and, since the data is noise-free, it’s more a function approximation problem than a statistical problem. 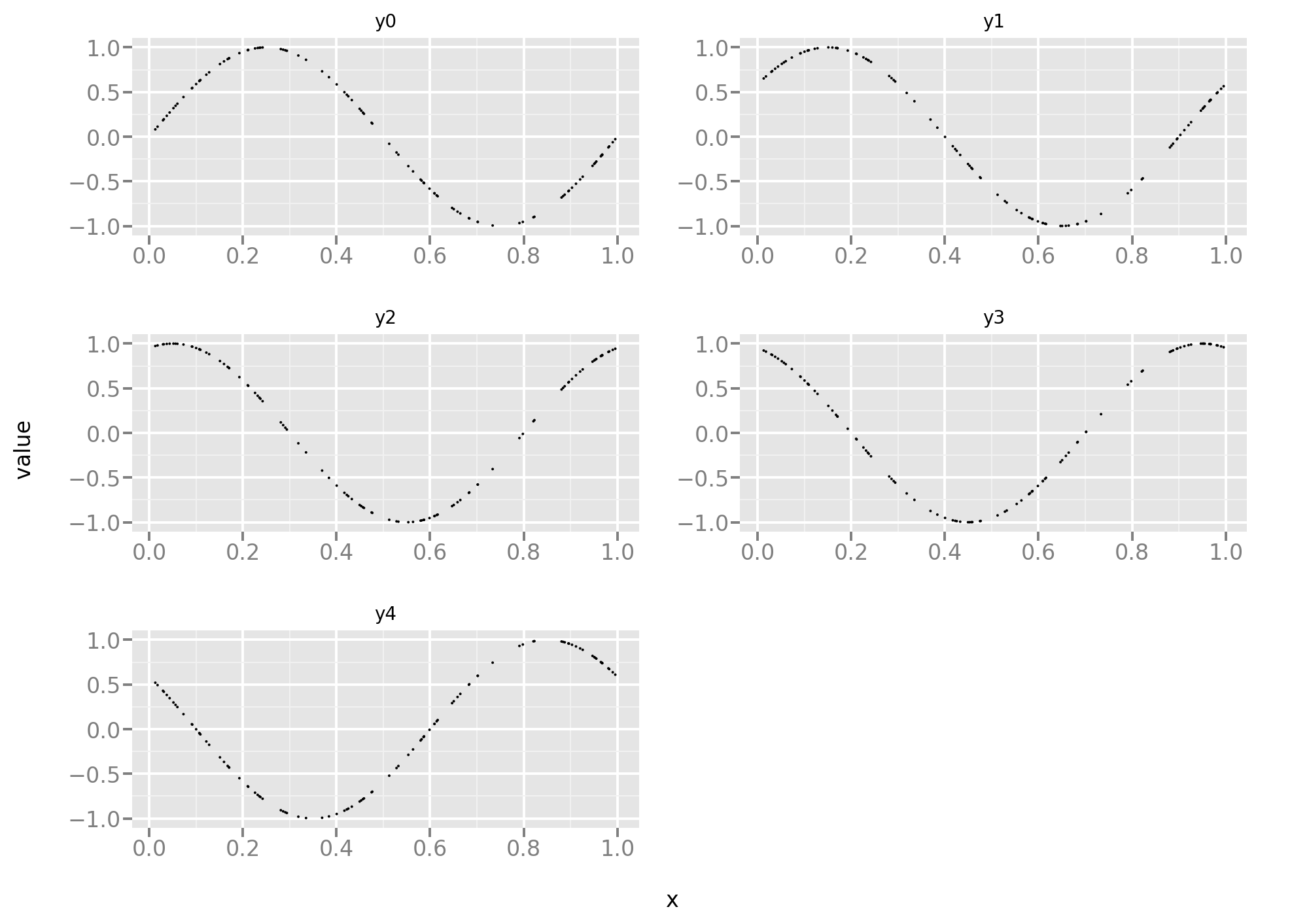 Let’s reuse the same code as in the first part of this post, starting with the standard MSE loss:

Let’s take a look at the loss dynamic to diagnose any problems in the fitting process: 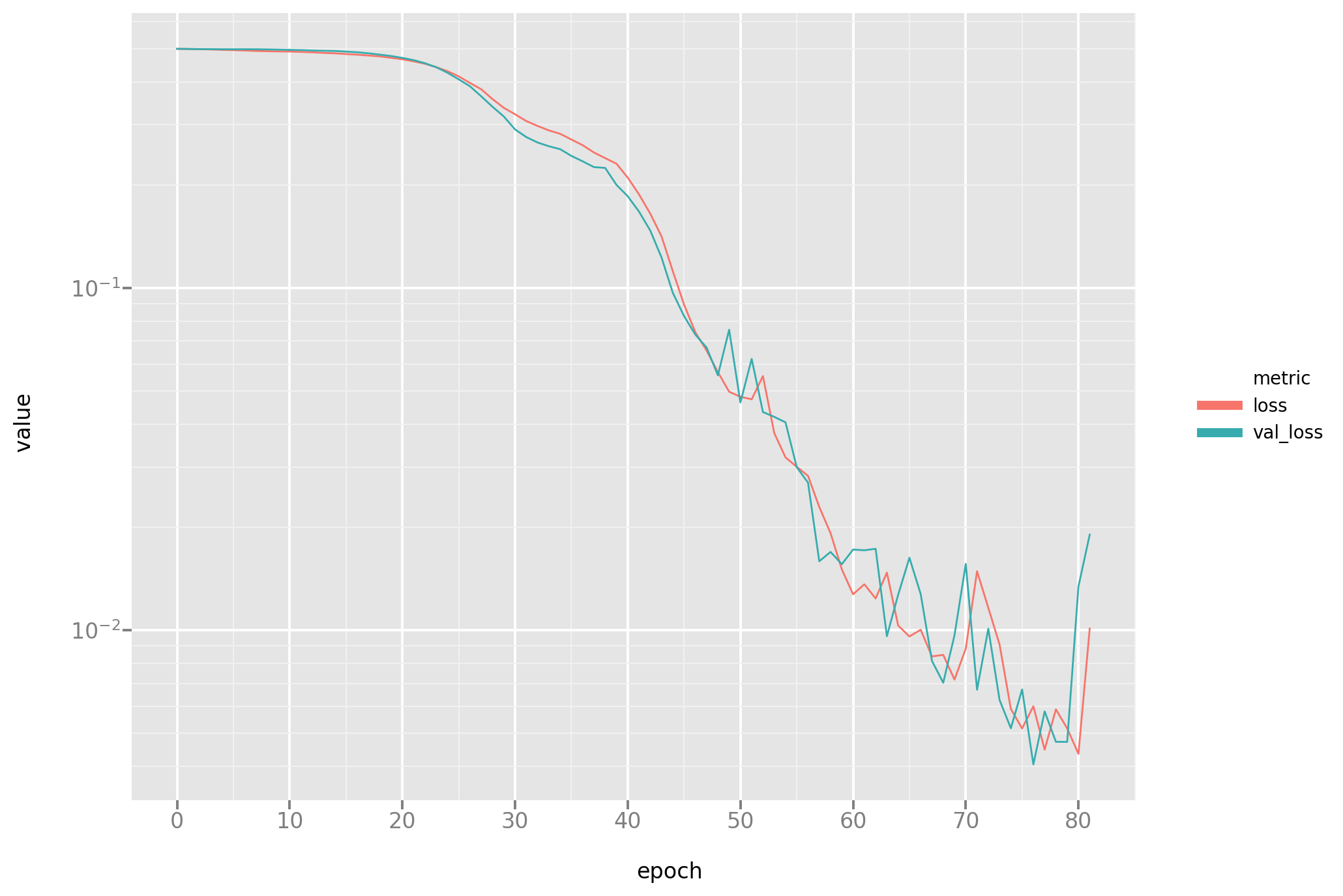 Next, let’s take a look at the results: 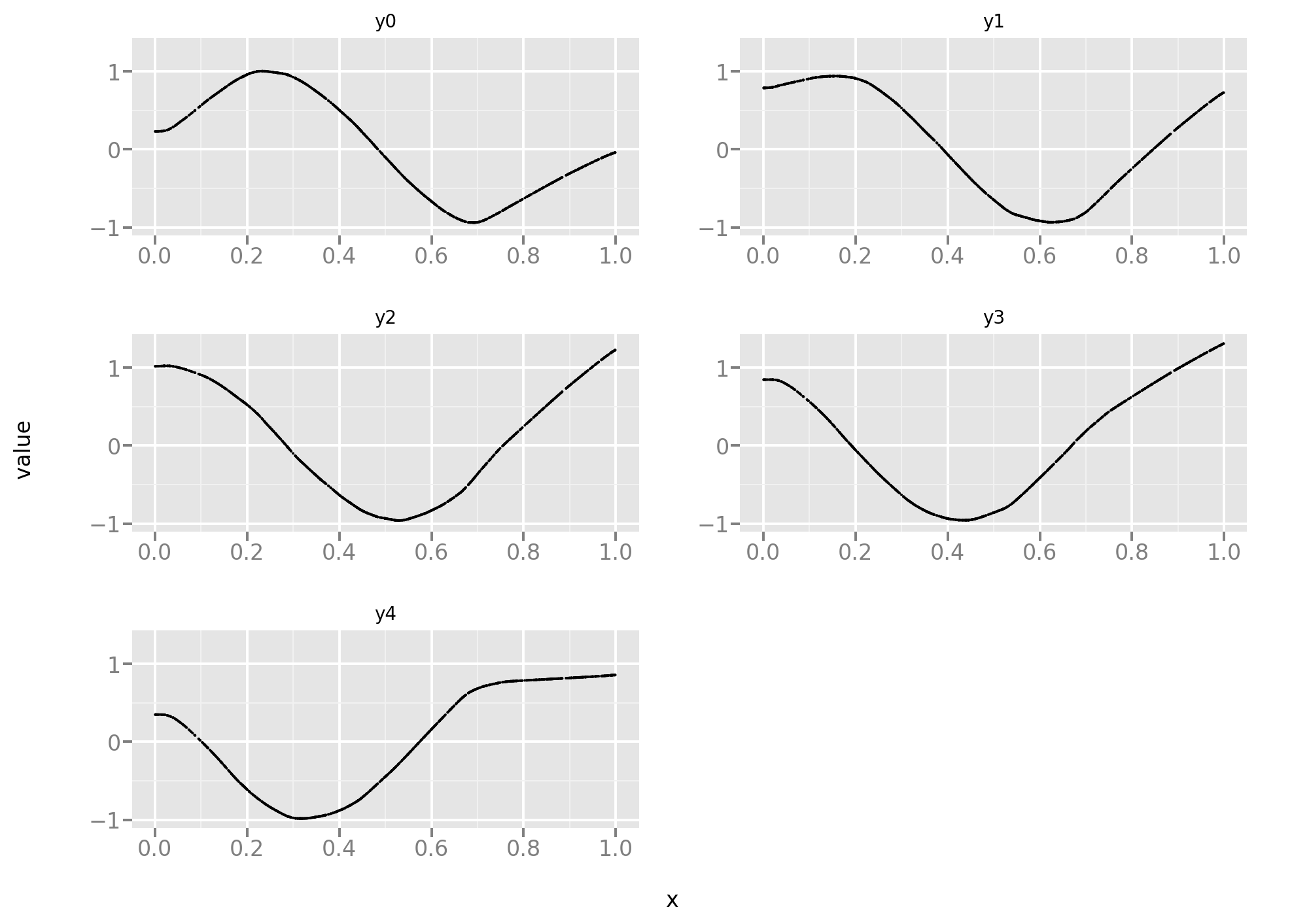 The next run differs only in the choice of loss function:

A look at the loss plot (please note some instability at the end of the process, as noted before a known problem with the Adam optimizer) 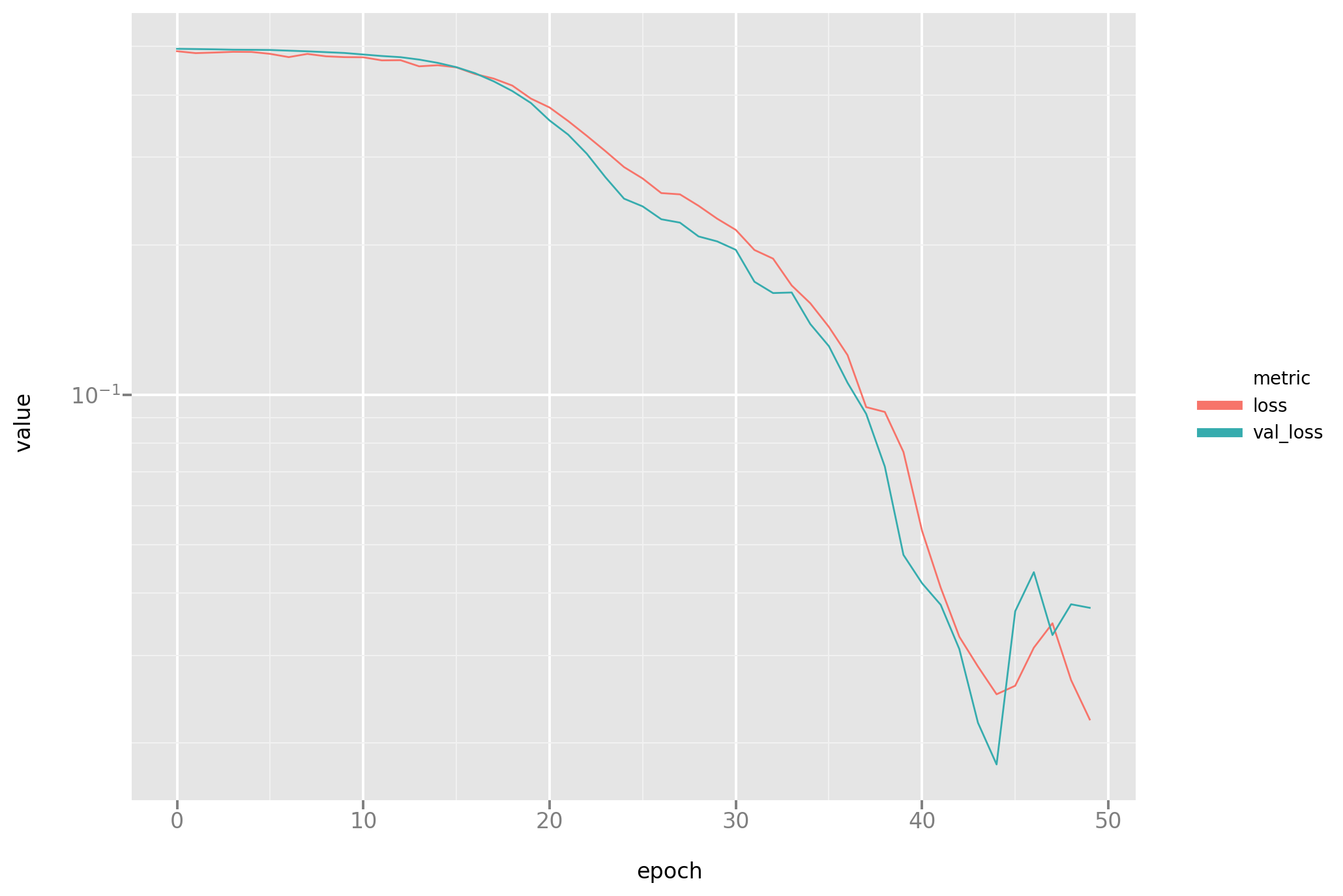 And a look at the predictions: 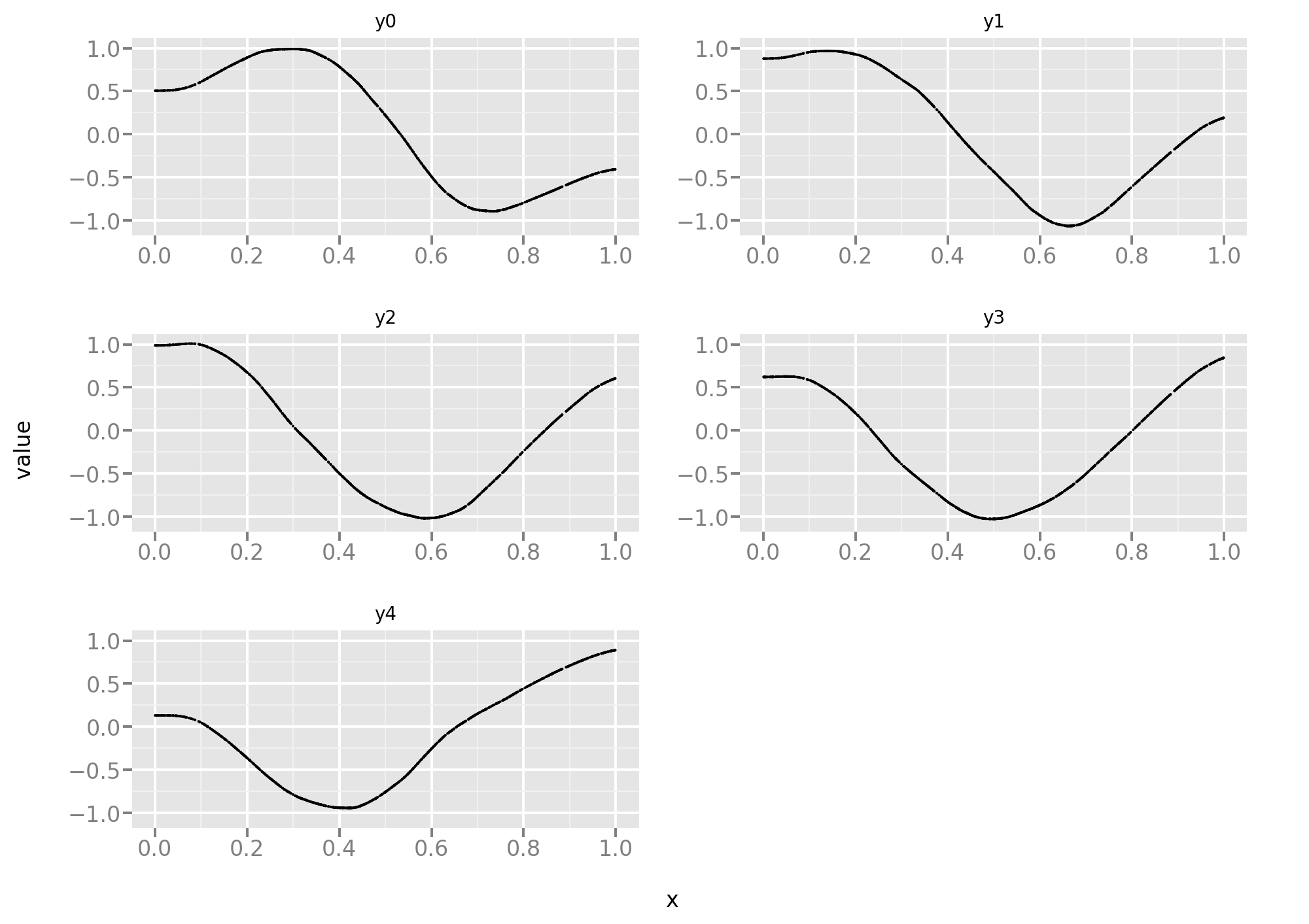 They don’t look great and a quantitative assessment confirms that impression:

Was it a fluke or a reliable comparison? Let’s use replication to answer this question: 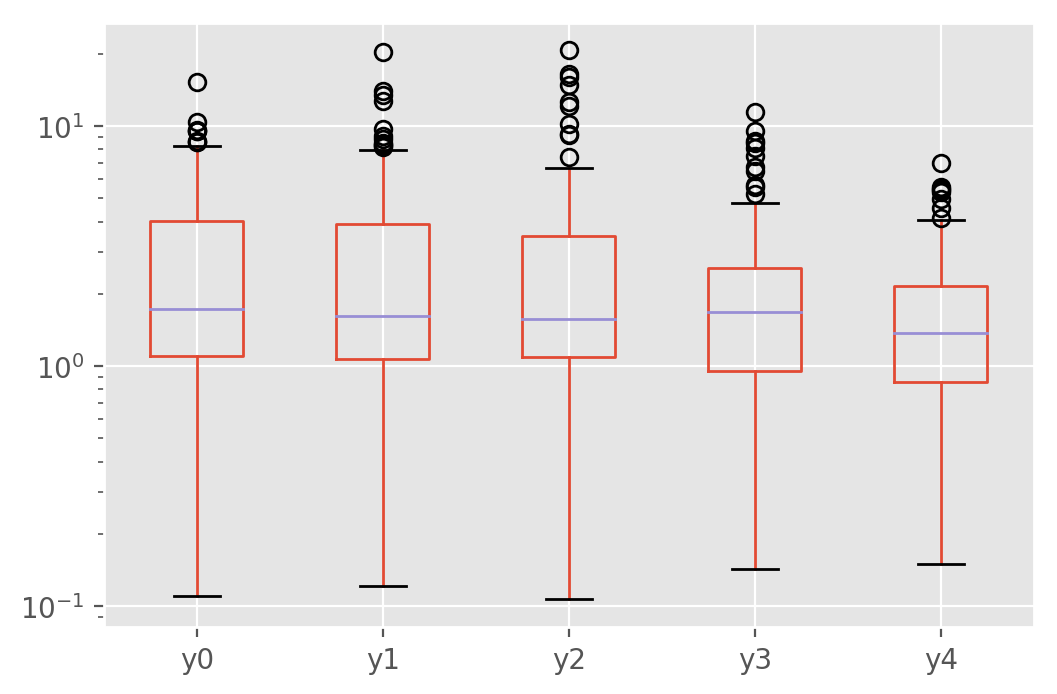 It does indeed look like the first run was not particularly representative. The boxplot shows instead that the multitask loss outperforms the MSE loss even when there is no statistical difference between the tasks in this particular example.

The multitask loss outperforms, on average, the MSE in both of the multitask learning examples presented here. Variability over several, independent datasets is a concern, and is addressed here by reporting statistics over many replications, hopefully representing a budding trend in ML research and practice. While these conclusions do not generalize to other tasks or neural architectures, they provide additional evidence outside the first paper in which the multitask loss was proposed. The underlying theory does not explain why this loss should be the best performer in the second example in this post, for which fitting additional variance parameters seems an unnecessary burden with no clear advantage. But, as it often is the case with neural networks and stochastic gradient descent, experiments seem to be a step or two ahead of theory. The closed form solution for variance parameters in the multitask loss paves the way for a very simple implementation with no performance penalty, and Keras provides intuitive primitives to perform the calculations on a variety of platforms.